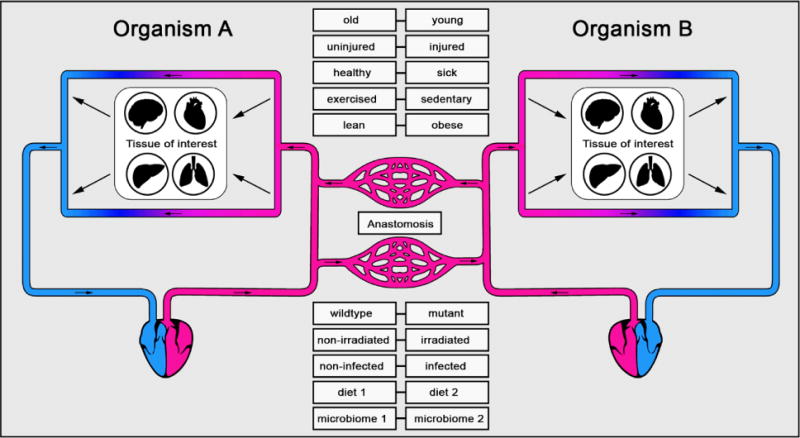 It has been known for some time that chronic diseases of aging such as cardiovascular disease, diabetes, osteoarthritis and Alzheimer’s disease are the result of an intricate network of mechanisms. These include inflammation, oxidative stress, and metabolic dysregulation. Such complexity requires transformative ideas and paradigms if we hope to understand and treat these conditions with any degree of success. Parabiosis is a technique which may just have the power to be such a paradigm-shifting experimental approach.

Parabiosis, which literally means “living beside,” is a model that scientists initially developed to study the natural phenomenon of conjoined twins. It is a laboratory technique by which two living organisms are surgically joined together. In joining two living organisms together, they will develop a shared physiological system, which allows for the examination of circulating cells and molecules from one organism to the other. Heterochronic parabiosis connects organisms of different ages to assess the impact circulating cells and molecules on age related disease.

This technique was first developed in the 1860s by French physiologist Paul Bert. It started with sewing together white albino rats at the flanks. As parabiosis evolved, however, the incisions extended along the entire body flank to increase stability and the surface for vascularization. Most experiments now utilize rodents since they have a higher resistance to wound infections. While many researchers were using parabiosis between 1960-1980, it declined drastically in popularity before being rediscovered by researchers at Stanford for the study of stem cell differentiation and tissue regeneration in the aged organism.

Parabiosis and the Study of Aging

Aging is a natural part of life that leads to chronic diseases such as cardiovascular disease, osteoarthritis, diabetes, or Alzheimer’s disease and related loss of function. Underlying that age related frailty is a loss of regenerative properties at the tissue level.  Some theories attributed this to loss of intrinsic stem function versus change in the microenvironment around the stem cells.

Early parabiosis studies helped discover humoral factors, factors transported in the blood that influence every aspect of health including cardiovascular and immune function. These humoral factors could be transferred between parabiosis study subjects with significant impact on multiple organ systems and longevity.

A related study showed that an aging systemic environment regulates neurogenesis and cognitive decline and can be reversed with parabiosis.

The Geroscience hypothesis posits that organism-wide systemic changes in the elderly are the major driver of most chronic diseases including cardiovascular disease, osteoarthritis, and dementia. This hypothesis is supported by parabiosis research showing that the serum of older people contains chemical mediators that accelerate aging and younger people contain mediators that are youth promoting.

Dr. Bradford Rabin received his BA from Stanford University with honors in economics. In 1998, he received his MD, from Stanford University, along with the Dean’s award for Outstanding Research for nine neuroscience publications examining the biochemical pathways involved in sleep. Dr. Rabin completed his internal medicine residency at the University of California San Francisco. After his residency, he worked as a clinical instructor in the UCSF Department of Internal Medicine.