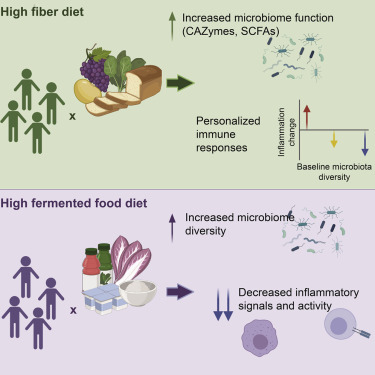 Multiple studies have shown that diet impacts the gut microbiome which in term may impact aspects of health including diabetes, Alzheimer’s, and cancer.

What are Fermented Foods?

Fermented foods, ubiquitous in health food stores and supermarkets, are an important dietary tool to positively impact the gut microbiome. On the other hand, there is a limited amount of evidence to help us understand how they should be used or their role in overall health. The process of fermentation involves the exposure of carbohydrates to yeast and bacteria to break the components down into alcohol or organic acids.

A recent Stanford School of Medicine study showed that consumption of fermented foods increases the diversity of the microbiome and decreases inflammation.

This 10 week study evaluated 36 healthy adults who were randomly assigned one of two diets. One diet consisted of 3-6 daily servings of fermented foods such as cottage cheese, fermented vegetables including kimchi, yogurt, kefir, and kombucha tea. The other diet consisted of high-fiber foods such as fruits, vegetables, nuts, seeds, whole grains, and legumes. These two diets yielded very different results at the end of the study.

The gut microbiome is composed of trillions of bacteria, fungi, and viruses, however the most is known about bacteria. There are up to 1,000 different species of bacteria and most of them are actually beneficial. These “good” bacteria have beneficial effects that include cardiovascular and immune health and “bad” bacteria that can cause disease.

A stunning finding of the Stanford study was that all the participants consuming the higher fermented food group and not the individuals in the higher fiber group showed reduced levels of inflammation. Specifically, it was found that four types of immune cells showed less activation in those who ate fermented foods for 10 weeks. Additionally, the levels of 19 inflammatory proteins were also reduced. Among these 19 inflammatory proteins was interleukin 6, which is associated with inflammatory conditions like type 2 diabetes and rheumatoid arthritis, as well as chronic stress. Since every participant who consumed the fermented food diet showed a reduction in inflammatory markers, this suggests that eating more fermented foods may have applications to people with autoimmune disease and chronic diseases of aging that are in part driven by inflammation.

With increased evidence pointing to inflammation as a pivotal cause of chronic diseases of aging, interventions that mediate inflammation warrant increased attention.

For patients interested in a less is more approach to medications and using food as medicine to optimize health, please reach out to us at [email protected]

Dr. Bradford Rabin received his BA from Stanford University with honors in economics. In 1998, he received his MD, from Stanford University, along with the Dean’s award for Outstanding Research for nine neuroscience publications examining the biochemical pathways involved in sleep. Dr. Rabin completed his internal medicine residency at the University of California San Francisco. After his residency, he worked as a clinical instructor in the UCSF Department of Internal Medicine.